Hygenically sealed in plastic for your protection: lunching at the Synod

Recently the NSW/ACT Synod of the Uniting Church held its 18 monthly meeting in Sydney. At these meetings members from Uniting churches from across the state and territory get together to worship, consider issues and generally network.

At the Synod before this, we agreed by consensus to divest from fossil fuel investments. We also agreed to oppose the mining of coal seam gas in our state. I was really proud of the Uniting Church for taking this stand on fossil fuels.

At this synod we also revisited and reaffirmed a motion from 2008 about climate change, where it was noted that:
(a) All the boards, agencies and schools
• establish current carbon emission levels
• establish targets for carbon emissions levels in light of relevant legislative,
regulatory guidelines and targets (noting particularly the 2°c target)
• identify the cost of achieving the determined targets and ensure that these costs
are included in individual budgets
• acknowledge that the desired target for the Synod of New South Wales and the
ACT is a reduction of 40% by 2020
• boards, agencies and schools report to each Synod on achievements towards these targets
(b) Uniting Resources to coordinate simple and cost effective procurement options for congregations to take up energy efficient and green electricity
(c) Uniting Resources, Uniting Care Social Justice and Communications Unit to develop an information programme and evaluation template to be provided to all congregations so that they might consider how they can reduce their carbon footprint and integrate ‘creation care’ into all aspects of their worship, witness and service, and all Presbyteries to support them in this journey
(d) Uniting Resources to revise standards for buildings to achieve a minimum four Green Star rating for all your buildings
2. continues to implement the 2008 resolutions
3. in order to assess its progress, carry out a full review on the actions of the Boards, agencies and schools as set out in the 2008 Climate Change Resolution.

I am unclear how much of this has been done by the various synod bodies named between 2008 and 2014. Many churches have certainly taken up solar panels, some innovatingly placing them in the sign of a cross on their roofs. I also recall an audit form that went out a few years ago in regard to church energy consumption.

I have to say I haven’t noticed a lot of ‘creation care’ going on in congregations. And I have noticed an enormous amount of waste generated by church events, in complete contradiction to what we say we want to achieve, a reduction in emissions.

Which leads me to the lunch of the 2014 Synod. As a member of synod, one could order lunches for each of the four days. The lunch was pretty much the same each day. It came in a disposable plastic shopping bag (did you know Australians use 10 million plastic bags a day? That's 3.9 billion plastic bags a year), and contained a plastic bottle of water, a fruit juice in a tetra pack, a sandwich in a plastic case or a roll wrapped in gladwrap, a giant biscuit or muffin also wrapped in 'soft' plastic, and a packet of chips, which of course is also a plastic bag. The one redeeming feature was a piece of unwrapped fruit. 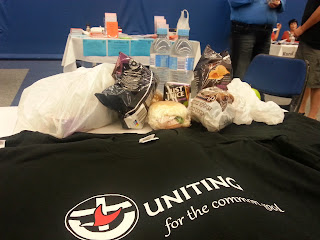 Do people really not know the issues with this amount of plastic and how enormous the carbon footprint of such a lunch is?

Let us start with the tetra pack. It is made of foil, plastic and cardboard. This makes it very difficult to recycle, though it is possible with the right equipment. When in landfill, the cardboard breaks down to produce methane, a powerful greenhouse gas with a global warming capacity 21 times greater powerful than carbon dioxide. I assume most of these drinks at the Synod ended in landfill.

Around 1 in 5 cartons get recycled at the moment in Australia, most councils around the country now collect these products for recycling. The wood and the plastic in them are new, so the production of these consumes valuable resources. The tetra pack also contains a single-use plastic straw.

Plastic straws are one of the great scourges of our wildlife. There are an estimated 46,000 pieces of plastic floating in each square mile of our oceans Throughout the world, around one million seabirds and 100,000 marine mammals are killed every year by plastics, either entangled and strangled by it or having choked or starved ingesting it. The 2013 Clean Up Australia Report showed plastic straws accounted for a total of 40 per cent of rubbish, up from just three per cent last year. Bottle caps and lids accounted for 10 per cent of rubbish picked up by volunteers, followed by fast food packaging (seven per cent). 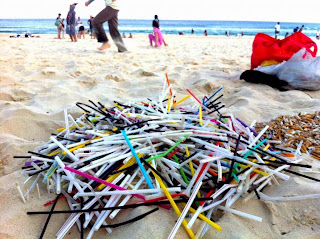 Almost 90% of the marine debris found on Sydney’s beaches is plastic, mostly bottles, caps and straws – all items found in our Synod lunch pack.

Which leads me to bottled water. We were all given a glass drinking bottle in our goodie bag at the beginning of Synod. Despite this, a commercial bottle of water was in every lunch bag. Bottled water generates an enormous amount of waste that mostly ends up in landfill. Most bottled water is packaged in PET plastic bottles which are derived from crude oil, an increasingly scarce resource and one whose use creates carbon emissions. This simply doesn’t make sense at any level in terms of waste and climate change and careful use of a precious resource, water. Further, bottled water requires transportation, and refrigeration, which also means more fossil fuels are burned. The whole process of producing plastic bottles has an impact on the environment, and whether they go into landfill, escape from the tip, or are recycled, they cost the earth. Literally. One use, ‘throw away’ plastic is not logical in a world where resources are becoming scarcer. Also, we need to remember there is no “away” when we bin something. It has to go somewhere. The bottles that end up in land fill break down to create toxic waste.

Here are some fast facts about plastic bottles:
• Over 400,000 barrels of oil is used per year in Australia to manufacture the plastic used to make the bottles
• Only 30% of plastic bottles are recycled
• It takes up to seven litres of water to make a one litre water bottle

Lastly, we have the ‘soft’ plastics, such as bags, sandwich and biscuit containers, chip packets and cling wrap.
According to various websites, in Australia we use around 6.9 billion single-use plastic bags per year, of which 3.6 million are shopping bags. Australians also dump around 36,700 tonnes of plastic bags into landfill each year. That is around 4,000 bags a minute. Plastic bags are also deadly to wildlife, choking animals or causing death from ingestion. Apparently the one human-produced article most seen by sailors is the plastic bag. Even when disposed of in landfill, they blow off tips and into bushland and waterways, where they can wreak havoc for years. While they can be recycled in limited ways, it is very costly.

Most plastic is not biodegradable and will persist in the environment for hundreds of years.

I am not clever enough to calculate the resources used to produce the Synod lunch wrappings and water, but I can definitively say that it would be a lot. And that most of the waste from it is heading for landfill, where it will break down into tiny pieces over the next 500 years, entering our food chain, waterways and literally, our wildlife.

We are not saving emissions or resources or our planet by such unnecessary waste. Isn’t it time we actually took the words of our own resolutions about ‘creation care’ seriously, put the planet before our own convenience, and did the right thing? 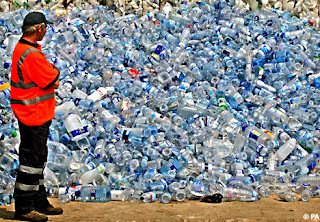 Posted by Elizabeth and John at 22:13

Elizabeth and John
Welcome to Elizabeth and John’s blog, where you can join us on our latest adventure in 2011. We first blogged in 2007, while we were living in Cambridge, UK (you can find it under the title 'Living with the Angels'). John and Elizabeth are married, and are both ministers in the Uniting Church in Australia. Here you will find photos and musings about how successfully we are transplanting ourselves to the verdant pastures of Wauchope, and what we hope to do. 2011 so far has been a year of great change for us, having moved from Thornleigh in Sydney to working and living in the Hastings valley. Of course, as well as working, we will be visiting a number of places of interest in the area. Here, in the future, we hope to post photos and commentary on our time in Wauchope as well as other places we will visit. We hope you enjoy exploring the blog! And ... if you are wondering why this blog is called 'the rural reverends', you haven't been paying attention.